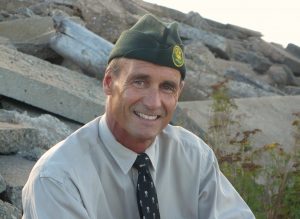 Michigan based author/songwriter Bill Jamerson will present a music and storytelling program about the Civilian Conservation Corps at the Zumbrota Public Library on Monday, October 3 at 7 pm.  The presentation includes telling stories, reading excerpts from his novel, showing a video clip from his PBS film and performing original songs with his guitar.  He has presented at CCC reunions around the country and at dozens of state and national parks. The program is as entertaining as it is important; as honest as it is fun. It is about people both ordinary and extraordinary, with stories of strength, wit and charm.

Jamerson has produced eleven PBS films on Michigan history including, CAMP FORGOTTEN – the CCC in Michigan which aired on Minnesota Public Television in 1994.  He produced a CD of original songs and has authored several articles on the corps.  A question and answer period and book signing will follow his hour-long presentation. Former CCC members and their families are encouraged to attend and bring photo albums and memorabilia.

This project was funded in part or in whole with money from Minnesota’s Arts and Cultural Heritage Fund.